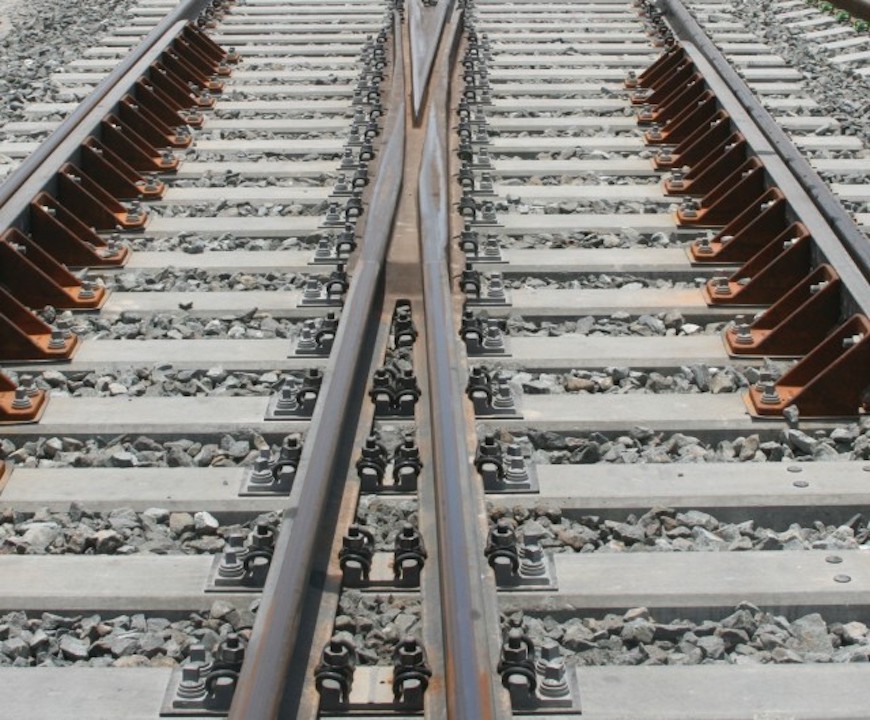 Historically linked to the construction of the Strasbourg tramway, Vossloh has provided a whole range of track and signalling equipment for the extension of line D towards the German city of Kehl.

At the recent project, the 2.9-km extension of line D between the cities of Strasbourg and Kehl in Germany across the Rhine, Vossloh had to face new parameters that have led to new choices. They developed and manufactured a new transition track, linking the grooved rail to the Vignole rail on the bridge. The expansion joints are able to absorb 120 to 140 mm of deck expansion.

Developments over the course of time

In Strasbourg, and in the six neighbouring communes that form the Eurométropole, the tramway is an integral part of the community’s DNA, with a very long history behind it. The first horse-drawn line was inaugurated in 1878 and the first electrical one in 1894. In the 1930’s, mass production of automobiles caused the tram to lose some of its prestige and it finally disappeared in 1960. However, like a phoenix rising from the ashes, it made its comeback in 1994, and has been expanding ever since. Today, six lines form a 45 km-long network and an international link to Kehl in Germany is being constructed. The new extension of Strasbourg tramway line D to Kehl will improve the connections between the two cities and will help to redevelop unused industrial zones. This has necessitated however, the construction of two bridges; the Citadelle Bridge over the Vauban basin and the bridge over the Rhine River. They allow the new 2.9 km-long line to cross the border, inside the Strasbourg-Kehl urban agglomeration and beyond the Strasbourg-Ortenau Eurodistrict.

Rail infrastructure is the core of Vossloh Group’s activities supplying equipment and solutions worldwide for all types of rail transport and associated services. For the extension of line D to Kehl, Vossloh, who had already equipped the Strasbourg tramway network, supplied the points and crossings, and extended the signalling, while integrating it to the existing network. The points and crossings are assembled in the 11,600 m2 workshop building of Vossloh Cogifer S.A. in Reichshoffen (fig 1.).

As turnouts are the most sophisticated element in a track system, their design, manufacturing process and maintenance require expert knowledge. With this in mind, for tramway turnouts for example, Vossloh has since 1993 relied on a monobloc design of switch cradles and crossings (frogs) rather than welding them from individual parts. Monobloc designs are much more robust over their entire lifecycle and offer the added value of comfort, safety and reliability. The Strasbourg Transport Company (CTS, Compagnie des Transports Strasbourgeois) has always selected this kind of premium points and crossings for its tramway lines as their wear even after near twenty million axle passes is so low that grinding is only required as part of the normal maintenance. This means less maintenance work over a significantly longer service-life than with other solutions and above all, savings of up to 50%.

The Vossloh turnout systems are delivered assembled on concrete sleepers to simplify their installation. The different elements are manufactured in the workshop by machining laminated sheet metal and profiles with high performance mechanical specifications. For example, the flexible and mobile switch blades are manufactured of steel whose breaking strength is 1100 Mpa and which has a Brinell hardness of 400 HB. These components and their manufacturing processes ensure that they function safely and remain reliable over time.

Also the switch control system, the switch blade position controller and the heating system – essential in winter, during low-temperature periods – are all installed in the workshop to ensure a »Plug & Play« installation.

Whether it is on a separate track or in a mixed zone in the city centre, where the tramway has to integrate with road traffic, the switches and points of Vossloh fit to all types of surfaces, such as grass turf, asphalt, cobblestones or others if necessary, to adapt to the track’s environment and to ensure total physical continuity of the road traffic.

The new bridge over the Rhine River, with a length of over 290 m, joins France with Germany. It constitutes the last link of this first international tramway. Its steel deck is composed of two equal parts that meet at the central pillar. To ensure a perfect continuity of running despite temperature variations between seasons, expansion joints have been installed in different locations of the bridge. Around twenty meters from its edge, they absorb 120 to 140 mm of deck expansion, as well as the corresponding expansion of the track. Vossloh’s »V-Net« range that was selected has a bidirectional model that has been derived directly from technology used for the TGV. As this was adapted to the Vignole rail, Vossloh designed and manufactured a transition track, linking the grooved rail to the Vignole rail on the bridge. In order to guarantee the security of the transition, anti-derailment guard rails have been set up.

The functional security of the tramway is directly dependent on the signalling and the equipment installed to prevent any accidents on the track. The equipment is under the driver’s control, who is the master of the tramway, selecting the destination, seeing where he is driving, respecting the crossroads, modulating the speed to keep a safe distance between trams and avoiding collisions. The driver must take into account all of the occurrences on the track, and, in the mixed traffic zones, watch out for all the pedestrians, cyclists and motorists crossing the platforms. In turnout zones, he must follow the signalling and control the turnouts to follow his route, in accordance with the command and control centre (CCC) based in Cronenbourg.

For the new line extension to Kehl, the new Port du Rhin tram yard allows partial journeys and »stocking« of trams. The Orbey-Briand tram yard, which is both a siding and a terminus, was modified to allow two-way traffic to Kehl. In terms of security, this modification involved replacing the relays of the automation system with a computer CPU. For both these yards, appropriate rail infrastructure was created and the new signalling was integrated into the existing network.

A private optical cable, installed along the tracks in a protected pipeline, carries all the data transferred between the CCC and the command, control, signalling and visualisation units. This centre is equipped with a server with hot redundancy. Its central units work in parallel to control the whole line. Security is ensured locally by SIL3 CENELEC bi-processors located in the machine rooms. If one of the processors is faulty or they are in conflict, the controller system automatically turns all signals red to place the related zone in security mode.

In the CCC, the staff in charge of regulating traffic is at the heart of the system of control and security. They have access both to the dynamic visualisation of what is happening on the line, and to all the information concerning the position of the switches, the state of the traffic lights and the section of the tracks where the trams are located. In case of a malfunction or anomaly, a radio conversation is initiated with the driver who has an exact view of the situation and can take the appropriate decision in order to allow the tram to continue its journey as quickly as possible. At the CCC, all the operating data is archived. Thus, in case of a problem, the »Replay» function allows to come back to a past event and take the time to analyse it.

All along the track, it is essential to detect the presence of a tram or a vehicle, and most importantly to differentiate them. Concerning vehicles, detectors are set up under the surface, and, in turnout zones, tram detection is operated by track circuits which guarantee the necessary level of security. With regard to crossroads, and parts of the tracks open to traffic, a selective detection loop allows the trams to be distinguished from other vehicles. However, on the other parts of the track, a magnetic loop detects the tram´s presence.

A close collaboration between Vossloh and its customers

Vossloh’s long experience in manufacturing points and crossings, as well as setting up signalling on tramways is a solid guarantee of their reliability for its customers who are Alstom, ETF and the CTS. The extension of line D towards Kehl train station, and perhaps later to the Town Hall on the German side, is facilitated by the previous collaboration between the different teams that have worked on various projects in Strasbourg since 1994.

The extension is expected to be in operation by April 2017, and will make both cities even closer than before.

Email: This email address is being protected from spambots. You need JavaScript enabled to view it.